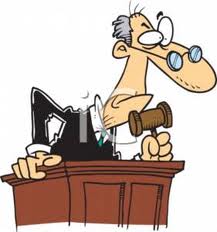 The devotion shared below is from "My Utmost For His Highest" by Oswalt Chambers. Conviction gripped my heart this morning for I know these words to be true. I have stood as the prosecutor sharing accusation and I have sat as a judge making a judgements against people. We criticize in others the very thing we are guilty of ourselves. As God forgives us and pours out His abundant grace, may we extend that same grace and forgiveness to others as well.
We really do not know people's hearts. Many times people are responding from hurt and not necessary from rebellion. I desire God,whose knows my heart, to be the judge, NOT people. Thank you, Lord for this devotion this morning!!

With what judgment you judge, you will be judged; and with the measure you use, it will be measured back to you —Matthew 7:2
This statement is not some haphazard theory, but it is an eternal law of God. Whatever judgment you give will be the very way you are judged. There is a difference between retaliation and retribution. Jesus said that the basis of life is retribution— “with the measure you use, it will be measured back to you.” If you have been shrewd in finding out the shortcomings of others, remember that will be exactly how you will be measured. The way you pay is the way life will pay you back. This eternal law works from God’s throne down to us (see Psalm 18:25-26).
Romans 2:1 applies it in even a more definite way by saying that the one who criticizes another is guilty of the very same thing. God looks not only at the act itself, but also at the possibility of committing it, which He sees by looking at our hearts. To begin with, we do not believe the statements of the Bible. For instance, do we really believe the statement that says we criticize in others the very things we are guilty of ourselves? The reason we see hypocrisy, deceit, and a lack of genuineness in others is that they are all in our own hearts. The greatest characteristic of a saint is humility, as evidenced by being able to say honestly and humbly, “Yes, all those, as well as other evils, would have been exhibited in me if it were not for the grace of God. Therefore, I have no right to judge.”
Jesus said, “Judge not, that you be not judged” (Matthew 7:1). He went on to say, in effect, “If you do judge, you will be judged in exactly the same way.” Who of us would dare to stand before God and say, “My God, judge me as I have judged others”? We have judged others as sinners— if God should judge us in the same way, we would be condemned to hell. Yet God judges us on the basis of the miraculous atonement by the Cross of Christ.
Posted by Unknown at 7:40 AM